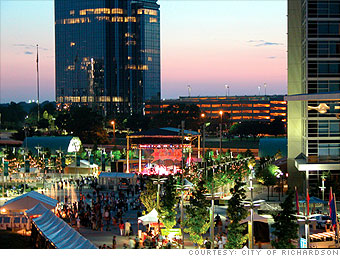 The beautiful city of Rockwall is known for bordering Lake Ray Hubbard and its many parks. Great for those who love the outdoors or have children, this Dallas Suburb feels nothing like the big city, with a lake separating Dallas from Rockwall. The commute, however, is very simple as Interstate 30 runs right
across the lake and straight into the center of Dallas.

With an inviting historic downtown, Rockwall is taking great efforts to revitalize its historic main streets into the heart of the city and into a center of recreational, economic, and cultural activity. The large farmer’s market established in 2008 and with more than 30 vendors offers the scene of a small town and close-knit community. A large part of the population consists of families and 35.7 is the median age of residents.

Rockwall is the county seat of Rockwall County and enjoys an average temperature of 66oF and average annual rainfall of 36.9 inches. It’s relatively small population of about 39,000 means there is more character and historic preservation than most big cities. Whether you are looking for a commute to Dallas or simply for a city that offers a great community and environment, Rockwall is an excellent choice.