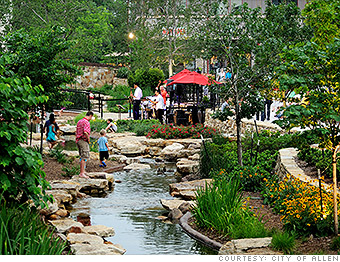 Only a 30-minute drive to the center of Dallas, Allen provides a great opportunity for anyone looking to work inside or outside of Dallas. With a modest population of 89,640 and a rich history of its own, you can escape the big city feel. It’s not surprising Allen was placed within the top 20 places to live by Money Magazine in 2008, 2010, and 2012, with its commendable combination of urban and rural amenities, such as nearly 50 miles of hiking trails, more than 180 restaurants, seven hotels, and nearly 800 acres of developed park land.

Traveling within and outside of Allen is simple with the Central Expressway (US 75) running North/South all the way through Allen and providing a straight shot to Dallas. Sam Rayburn Turnpike also runs along the Northwest edge of the city. Within the city, you’ll find public transportation provided by TAPS Public Transit.

Families make up the largest demographic of Allen, and although the average age is 34.7, it was also named one of the top 25 Best Retirement Places by Forbes in 2011. Safety is important for all residents and was ranked the 21st Safest City in Texas by Safewise.com in October 2013, and 9th safest city by CQ Press in December 2011. The Police force has one main station and four storefront locations while the Fire Department has five Stations; both departments have an emergency response time under six minutes.

The climate in Allen has a sunny disposition with an average temperature of 62.83 degrees F and average rainfall of 41.0 inches. The whole of the city spans over 27.11 square miles, providing ample space for business (25,000 sq. ft. adjustable meeting space within hotels) and recreation alike.